Juvenal was a Roman satirist (my people on both accounts!) -- he is famous for a saying, "Bread & Circuses" and it comes from this quote:
"Once a state extends the franchise to every warm body, be he producer or parasite, that day marks the beginning of the end of the state. For when the plebs discover that they can vote themselves bread and circuses without limit and that the productive members of the body politic cannot stop them, they will do so, until the state bleeds to death, or in its weakened condition the state succumbs to an invader.  The barbarians enter Rome."
Keep in mind, the circuses are the killing of Christians by lions in the Coliseum.  And really, is our entertainment any more high minded these days?  We kill people in spirit daily by mocking.  There is no room for normal disagreement these days.  You're branded a bigot and worse if you don't vote for the little guy.  But you know, I actually pay taxes, and therefore, I will not vote to raise them.  I can barely afford my house taxes as it is.  Look at the mess of California voting for every little guy has made.  The state is bankrupt -- and yet most of us will struggle to pay house taxes in the tens of thousands -- often for houses that are no longer worth anywhere near their value.
With Reagan and lower taxes, we had 25 years of a great economy.  We were all better off in our lifestyles.  Small business employs something like 85% of this country, raise their taxes and we will not get more jobs.  I fear it's going to get ugly.  We do not have the money to keep supporting everyone who has a mishap or weather tragedy.  So call me coldhearted, call me a bigot, but my state is being overrun with parasites, do you want yours to be next?

So you know when you hear about a new beauty product, you're sort of ho-hum.  Don't they all claim to be different, better, more technologically sound?  And don't you want to believe them?  Don't you want to think, hey, if I use this product, I am going to be Angelina Jolie?

And then we feel stupid for wasting our money.  Same ol' us, only poorer.  So today I went out and bought a new flat iron.  I have a tiny half-inch one that's great, but my hair is really curly so when I need to pull out the big guns, I needed a bigger one.  I had a Chi ceramic one.
So I go to the beauty supply store (okay, my total downfall!) and this gal shows me this Croc Pink TITANIUM flat iron.  I'm like a guy who hears about a bigger engine...TITANIUM, you don't say!  My grandma's hip was made out of titanium, it has to be good.  Surgically-able, you know?
$163 later I walked out of the store with my Croc and you know what?  WORTH EVERY PENNY!!! It has taken my wayward hair and shown it who is boss.  GO PINK!!! 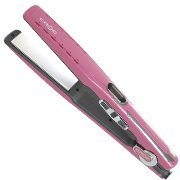 When Iraq held their first elections, people took their lives in their hands to vote.  Our voter turnout is worse if it rains.  How pathetic is that?

I think it comes with the territory and a sense of entitlement.  You don't appreciate what you haven't worked for.  Hence, the reason teens think they deserve an iPhone and $150 jeans.
This economic crisis will be good for America -- because America needs to get a clue.  We've forgotten how to wait or work for anything and we're teaching our children that it's their right to get whatever they want.  Unfortunately, when they get out in the real world, we're not going to be able to protect them from the truth.  Truths like, your boss really doesn't care if you need your beauty sleep and want to come in at ten.  Truths like your competition is better than you, but can you judge the race on a curve?  Truths like, you aren't supposed to have a minimal paying job and afford a house.
The truth ain't pretty sometimes.  Think about it, the world is facing economic disaster because we as a whole couldn't say no to ourselves.  It's a wake-up call for me, I'll tell you.  The reason I work so hard is because I had to.  I've worked since I was 13 years' old because I wanted store-bought clothes, not homemade.  I worked in high school so I could pay for gas.  I worked in college, so I could pay my rent and for food.  I work now so I can live in the Silicon Valley, which is my home and too dang expensive.
When I see what the Chinese or Indian parents have given up to come here and give their kids a better life -- leaving their homeland and all they know, it really gets me in the gut.  Is it any wonder they have extreme expectations from their kids?  And what's wrong with that?  Didn't our ancestors have to get up at 5 before school and milk the cows?
It tells me I haven't prepared my kids well, and so God is going to do it for us, and that so sucks!  Let's learn this one quickly!

So is Maury out of a job?

I'm going about my business this morning, reading the coupons, trying to be a good housewife and all that, when I come across an ad for a DNA Paternity test kit available and your local CVS and Wal Mart.  Really?  I mean, are there really enough women out there who don't know their baby daddy that a test needs to be readily available?  Or is it the dads who don't want to take the responsibility.

Whatever it is, what a sad, sad state of affairs.  Is Maury still on?  What will he do now?  Didn't you always wonder who would be willing to go on National television and have up to three/four guys who might be the daddy?  Don't they have mommies?  Grandmas?

I love handbags, but I find I've let my wardrobe go, and when you wake up and realize this --that truly, you have nothing to wear.  Plus, there are sales, and you're done with your book...well, you know. It's like a sign from above.  It just happened.  And I should feel guilty, but really I just want to tell you about the great deals I got.  And that's a bad thing...right?
So while I know, I can't single-handedly fix the economy, I can do my part to keep America running.  I'm sure doing my part to keep California running with its ridiculous taxes, based on the price of your overpriced house.  Hello??  Someone in Sacramento was smart.  So was the guy who figured out if you pull taxes out of a paycheck, people don't realize how much they really fork over.
I do not want to pay taxes during cashmere season.  Am I making my point?  Don't they know my house is a dump and priced in the millions only because this is CA.  I'm telling you, the nerve.

I'm really sick of whatever Sarah Palin does, the press goes after it like a pit bull to a steak, but I swear, if Obama robbed a grocery store with a handgun, it would be deemed a misunderstanding.

Honestly, I love Sarah because she's a girly-girl.  I'm tired of a working girl being deemed "stupid" while Obama, the man whose never held a real job in management, is deemed a genius -- or, too intellectual for you.
Seriously, take the politics out of it and look at the situation.  It's just not okay to me that she gets lambasted because she's a mother and she's done what most of us working mothers do to get by.  Anything Obama, OR McCAIN for that matter, accomplished, they did so without doing the grocery shopping, driving the kids to soccer/hockey, and trying to feed their family on $10 a day.  All I'm saying is when it comes to management?  I'll take a woman any day, thank you.
I hate politics in this country anymore, because lobbyists rule and the people will not be heard.  Both parties voted to bail out the big banks -- though no one stopped our government from saying everyone should own a house, and go ahead, borrow until you drop.  Fannie Mae, go ahead, get into the charity business.  You may not have graduated from the 8th grade, but you can buy a house, why not?
At some point, we're going to have to pay the piper for our lifestyle, and it's not going to matter who is in charge.  Because they all answer to deep pockets.  Sigh.

You had a baby...how novel!

Here's my rant for this Friday.  What is up with all the headlines, "Look how fast she lost the baby weight!"

Here's the tabloid cycle:
OMG, they're dating!
No, they broke up!
Baby Bump!
They're engaged!
When will the wedding be?
Surprise wedding!  (We weren't allowed to crash with our helicopters!)
Exclusive Wedding Photos (ie., we paid them to be voyeurs or, the rich get richer.)
Is she having twins? (Dang, she's a cow! Or...just like a normal person.)
(Except normal people aren't that thin when not pregnant!)
How She Lost the Weight!  (Another reason you wish you possessed her genes.)
Too skinny?
She Enters Rehab!
He Walks out...
They're Dating!!
Is it any wonder the government can steal all our money and give it to the banks, who lost it in the first place?  I mean, we're so busy figuring out who Nick Jonas is dating, do we have time for high finance?  I think not.
But my big pet peeve is the baby weight stories.  How about if they focus on what it actually takes to be a mommy rather than how fast a woman lost the weight?  I am naturally thin.  Always have been.  I've had four kids and I finally look "normal", so when they put this whole freakish skinny thing on real moms, I want to explode.  They did not get that way with yoga, pilates and nonfat yogurt.  They were a size 2, they're 20 and someone else cooks for them generally.
SO people, people!!!  Watch the money being stolen from you and ignore Bradgelina, capiche?