My friend's husband and I have a long history of teasing each other on our bad viewing habits. When he sees me, he always says, "There's no such thing as ghosts, Kristin."

And I reply with, "There's no such thing as mermaids, Dan."

I watch all the ghost shows. Dan watches all the mermaid shows and Sunday night's Mockumentary on the Animal Planet set records -- an all-times ratings high for that station. Of course, the new season of "Paranormal Witness" starts on Wednesday, so Dan and I will have no shortage of torturing one another.

Got a favorite conspiracy you love to watch? 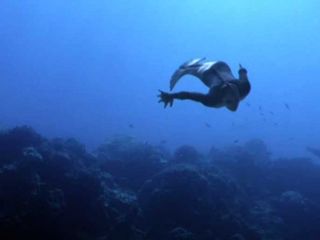 Is it possible to be born without brain cells? Joran Vander Sloot Getting Married

There are people who kill from a place of passion and unbridled rage. And then, there are sociopaths. People without feelings, empathy, remorse or guilt. Granted, neither one is a catch, but this is Joran Vander Sloot. And some idiot is going to marry him in jail.

Sociopaths cannot love. They can only feign it. This is probably made much easier by the fact that he's behind bars and will not be with her often. Easier to keep up a sweet front when there are bars between your love. 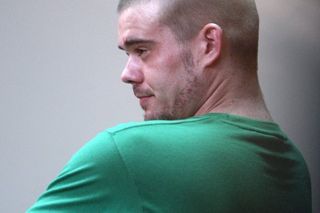 There are no words...

And I'm a writer.

This is the woman the press is saying is scheduled to marry our hero. Reports are that she may have borne him a son. This darling video by Cheerios was forced to be taken down after racists commented horrible things because the commercial features a "mixed-race" family. I hate that term. Mixed-race. Mixed with what? We're all human.

It's hard to believe in this day and age that people think this way, and I wonder if they had to come out publicly and put their names on their comments if they'd be so forthcoming.

The commercial is darling. I hope it goes viral and taunts the trolls.

I'm not a cat fan -- and a grumpy one? But put them together for snarky, Grumpy Cat and I'm all over it. I still have my Anderson/Grumpy Cat pic as my screensaver. They're saying it will be a Garfield-like movie.

This poor cat. Just wants to nap and no one will leave her alone. I'm embarrassed to admit, I'll see it. I'll use my daughter as an excuse, but I will definitely see it. 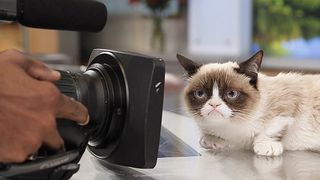 Make the Simple Eventful -- Dance Like No One's Watching!

I wish all of you could have as much fun as we have in Silicon Valley. Here's the rub. You have to be willing to have people stare and make fun of you. That being said, my kids and I know how to enjoy the mundane.

For example, my son didn't have to go all the way to the Great Pyramids of Giza. They're right here in the Rite Aid parking lot. Who knew? 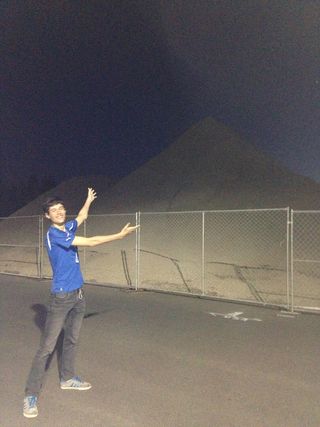 Then, I reenacted the entire song, "You're the One That I Want" in the soda aisle. Funny how when you learn something in sixth grade, it sticks with you for life. Actually, Jonah didn't think it was that funny and he made concerted efforts to get away from me, but whatever, I told him it was payback for his tantrums in the cereal aisle.

I hope we never do anything that's on "Dateline" or one of those shows because our security cam footage would be totally humiliating.

Go ahead, dance like no one is watching...but be wary of security cams. 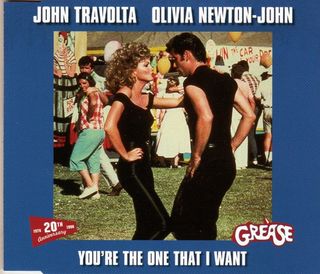 This guy, Halsey Minor, made nearly Two BILLION dollars. (Can anyone hear that without saying it in Doctor Evil's voice?)

He squandered it. He's filed chapter 7. So basically, to us regulars, he's still as rich as Moses, just restructuring cash probably. But he proves my point about people who think so big like this don't think in terms of small money. They're always investing, always onto the next big thing and they take big risks. That's why they're able to make the big bucks, but ultimately, you still can't spend more than you make. (Do you hear that Federal Government?) 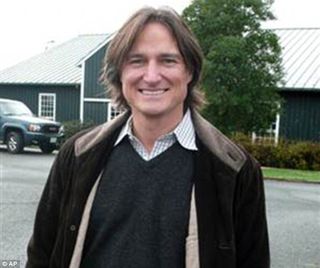 Waste bothers those of us who don't have this kind of money. And this is MAJOR waste. He bought this mansion in San Francisco, a replica of the living quarters at Versailles and here's the wasteful part: HE NEVER LIVED IN IT!!

That makes me a little insane. Because he was just living so unconsciously. You can't have more than you can pay attention to, and if you're completely ADD like this guy, know your limits. He needs to watch "I Am" and learn what's important in life. Tom Shadyac could teach this guy a few things. And by the way, I LOVE Tom's mobile home at the beach. I would totally be happy there. (If you haven't watched the movie, find it. Fabulous reminder of what matters.)

Here's just one home Minor wasted. Seriously, I can't even feel sorry for him because it is SO expensive to live here, and I would have gladly moved in and kept it up for him. Very nicely too. 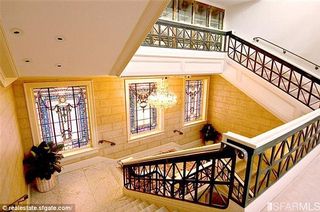 What's your version of the American Dream?

David Karp is my new hero...

Who is David Karp? He's the young entrepreneur who just sold Tumblr to Yahoo! for a cool $200 million, give or take a few bucks. I love him because he's young and yet, totally gets it! How often does that happen? It was never about the money for David. He did it for the love of what he did -- and made money on it.

Tumblr's first employee seems to get it too. Marco Arment won't allow his money to own him. He's not going to be making lavish purchases that require him to care for things. I love this. Because money can easily own you. And it really is best to put your focus on what matters. If you have four houses and expensive cars to look after, it costs you something. He gets it. Even if you have others take care of it, you have employees to care for.

Some people are natural managers and don't mind taking care of a lot of stuff. I married into a bunch of rentals, and took over their management. I hated every minute of it. I'd rather be focusing on life and what I loved doing. To me, rentals were more trouble than they were worth. I love that someone else gets this lesson early. There's investment and there's stuff that comes at too high of a cost. Good for both of them. 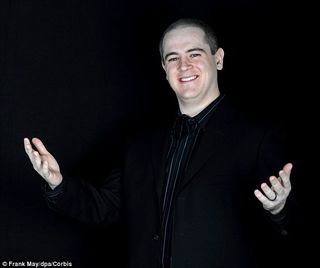 http://www.dailymail.co.uk/news/article-2333126/Tumblrs-employee-explains-wont-buying-lavish-possessions-new-wealth.html
Note that they don't live in Silicon Valley. Could that be the reason for their common sense approach?

Isn't this fantastic? And best of all, it was done at the Myrtles Plantation in Louisiana (one of the best ghost photos ever was taken there, so it's great that a T-Rex "invaded" as well.) A girl and her Photoshop.

This couple looks like a lot of fun, and their wedding photo will be remembered. I'd do it, what about you? Do you prefer something more formal? 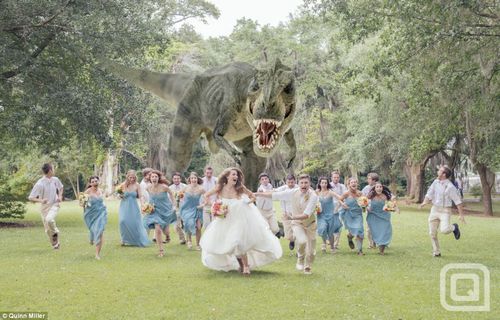 This makes me wish I could bake...

It's from Heart Touching Fun on Facebook. It is just SOOO cute, and it makes me wish I had baking talent. Alas, I do not.

I can cook, but bake? You have to measure for that, and I've got too much Italian in me. Recipes are to taste.

I think I'm allergic to the measuring cup. Can you bake? I'd like to do the decorating, but not the baking aspect. 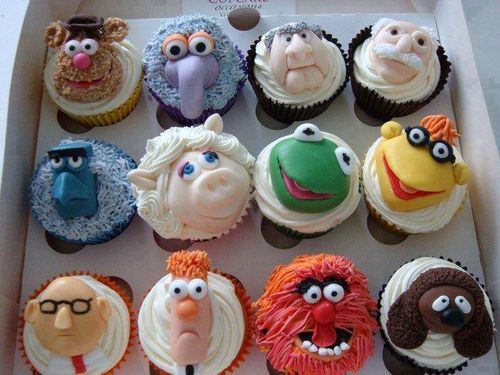 Kristin Doesn't Play Well With Others...

Actually, my teachers never said that. They said I needed to sit down and shut up and stop being social. But that's not my point here.

I've been asked to be in quite a few novella collections lately, and I just want to say, that is SOO sweet of people to ask me. I know there are a few out there who are trying to get me fired up about writing again, and I love that. It makes me feel appreciated and Kardashian-like.

But I'm terrible at group books. It's so hard for me with my attention issues to deal with OTHER people's stories on top of my own. Yes, I do it for Smitten because the girls know me so well and vice-versa. Denise Hunter makes up for my lack of organization. Colleen Coble stays in charge of dates and pings me when I need to wake up and Diann is just 100% supportive.

So that's why I write the Smitten novellas and not the others. Nothing personal, but if you haven't known me for 17 plus years as these gals have? You're in for a world of hurt. : ) 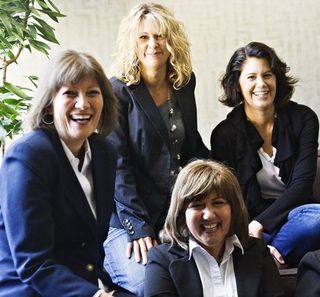 I just found this great picture with Kristen Heitzmann, Karen Ball, Colleen Coble and myself. We had so much fun hiking that day. Mt. Hermon rocks! 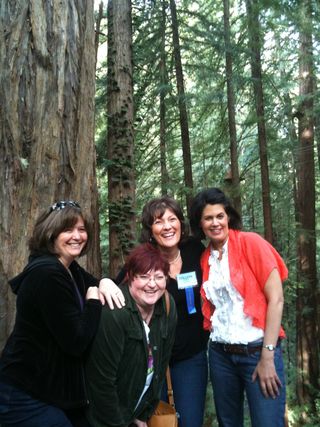