I'm pretty good at tuning things out. I remember seeing my SIL read a book with an entire family reunion going on around her, and being astounded. Then, I had kids. And I learned this is survival. You learn what to listen for: Quiet, toilets randomly flushing, sneaky giggles and HELP MOM! That's about it.

However, when writing in public, you're at the whims of others and what they consider appropriate coffee shop behavior. Warning: It may be different than your definition of appropriate cafe behavior.

Sometimes, I wear headphones, but usually not because I'm nosey, and I might miss something I can use in a book. But I've found over the years, there are three things I cannot tune out.

1. A child being treated poorly by a parent.
If the kid is just screaming because they're upset, have at it. But if the parent is being neglectful or callous, I can't tune that out. I want to run to the phone booth, get my supermom costume on and come to the kid's rescue.

2. A really interesting conversation that suddenly goes quiet. I have TERRIBLE hearing unless something is none of my business. Talk on the down-low, and I've got to know what you're saying!

3. A cackling laugh. There's a cackler here today. This strikes me in my core for some reason. Why? I'm glad the woman is happy. She's enjoying herself. That's a good thing, right? But a cackle just sounds so evil and pointed, it gets me in the gut.

These three things pull me out of hyper-focus mode, and make writing in public impossible. Hence, I'm blogging instead. Okay, in all seriousness. There are TWO! cacklers here today and they're not together! I don't know why it makes me think I'm in an Edgar Allen Poe story, but there you have it. 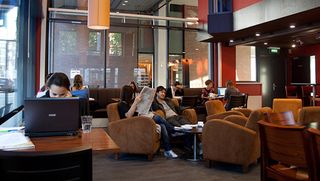 Can you work in public? 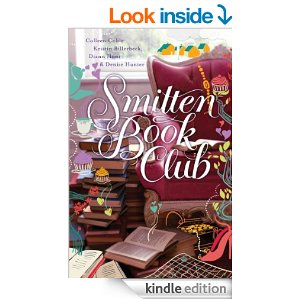 This is a great, cozy weekend read and a steal if you haven't purchased already.
With Colleen Coble, Denise Hunter and Diann Hunt. (My besties and all around great people!)

Thanks all for those of you who have stuck with me through Typepad's week of issues. I hear now that people can read, but not comment. I hope their issues are worked out for good today!

I'm on the last layer of "What a Girl Needs" the new Ashley Stockingdale novel. (I write in layers and go through several times adding story/setting/humor, etc.) So although the book is late (sorry Dickens!); the lesson here is that nothing ever works out the way you plan. The sooner you learn to go with the flow, the easier life gets.

But it does work out the way it's supposed to. I have a relative with cancer, and I'll be staying there to write for awhile. I think about how authors say their deadlines come before anything, "It's their job." And that will just never be me -- I'm sadly not that dedicated. I admire these authors and their stamina, but people always come first. I'm a caretaker first, author second. I'm sure there's a whole lot of boundary issues going on there.

Speaking of people, I need to kick my kids out for school. 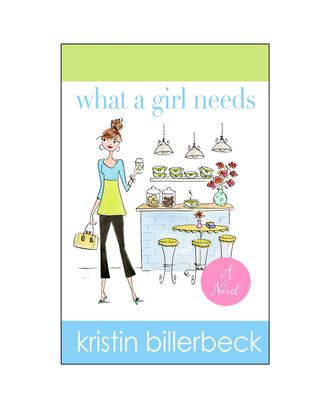 I need a new writing chair...

Look, I tried using a cushion for awhile, but this thing is gone. Like over. I need a new writing chair, and do you know what's keeping me from buying one?

Well, first I don't want to have to pick one. I could pick the wrong one. Next up? Putting it together. I hate putting furniture together. But if I'm going to use that famous acronym for writers: BIC -- butt in chair. Then, I need to get a chair that my bum can sit in for long periods. Look at my sad, little baby.

I wonder if I could delegate this job and send my son to Fry's for me today. His is worse than mine, and we should really take a big trip to the Goodwill and start over on office furniture. 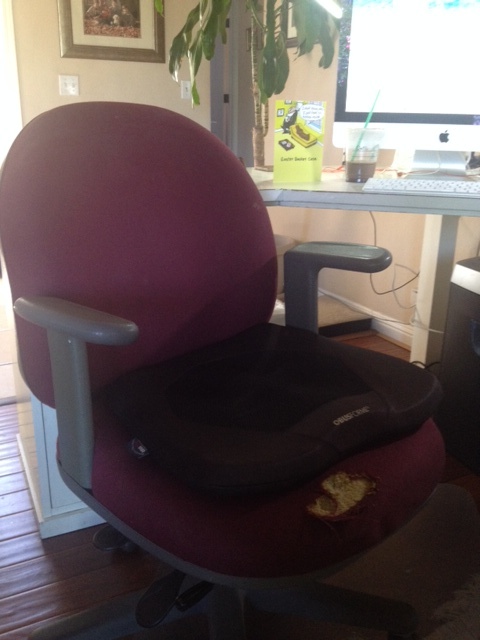 This is pretty much why I keep to myself. LOL

DH goes to Korea a lot for business. For years, I have joked when I am ready for my facelift, I'm going along. The plastic surgeons I worked for here are Korean -- there is something about the culture that melds artistry with surgical techniques. Koreans just appreciate symmetry and they've perfected plastic surgery. (It's a huge part of their culture in Korea.)

Now, they're saying you need a certificate to travel afterwards because they surgical results are so dramatic. Do you think they took part of this girl's jaw? That must hurt like a mother. 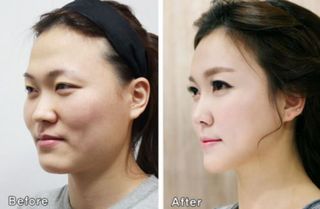 But when I'm ready for my facelift, I'm going Gangnam style! (Okay, not really. Having something done to my face scares the daylights out of me.) But you have to admit, there's no plastic in these results. They're pretty amazing, so if I was going to endure the pain...I'd go to Korea.

The truth is, I'd rather have a Prada than a younger face. We all have our priorities.

I was shopping for a gift this a.m. (I have a migraine, so work is waiting!) And I came across this "angel pin" -- now if this doesn't look like something straight out of a Tim Burton movie, I don't know what does.

Can you imagine giving someone this? What does it say?

Here. Please wear Satan on your lapel when you think of me. Satan in Christmas colors. Ahh, the warmth.

FYI, if someone gives you this? The message is deeper than, "I'm your friend."
I wonder if it comes with a voodoo doll. The Ghost of Vivien Leigh

I do love Vivien Leigh. Love her tragic story. Love her incredible acting. Love her legendary beauty. I wasn't fond of her taste in men. Never could stand Laurence Olivier, but this is where Vivien's ashes were scattered, and the house has just come up for sale. Isn't it perfection? 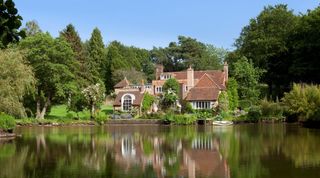 I would totally be willing to share it with the queen herself, if she were still hanging about. Wouldn't you love to own a piece of history like this? Or is it just me? I can't imagine why anyone must move from such a paradise, but how wonderful that they kept it so incredibly beautiful while they owned it.

I have to include my favorite picture. Just because I love the defiance on her face. You go, girl! She didn't want your mealy-mouthed husband anyway. 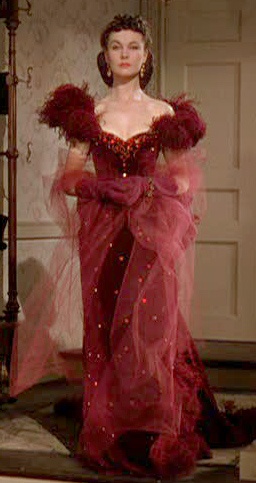 I started out not liking "Southern Charm" -- not one iota. However, I kind of fell for Thomas Ravenel and Kathryn Harris' love story. There was literally nothing else to recommend it for me. I don't get the creepy vibe from Whitney, who I understand produces the show, so it's not likely we'll be rid of him in season two. The other people on the show don't seem to have a storyline. Maybe because they don't really have a life/job/reason to be interested in them. Maybe that will change.

I'm really not a fan of the young lawyer, who I couldn't even name. When you write a novel, the heroine/hero needs a goal. A pursuit. I offer this advice up to the producers of Southern Charm for season two. 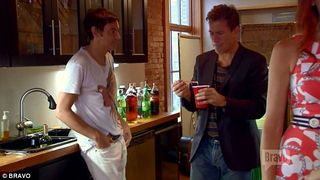 Whitney's mother is obnoxious! I hate the way she talks to people as if she's got her life together. Lady, you're trying to keep your 40-something son from moving out. That is WEIRD. I don't care how much money you have, it's still "Psycho" like. No one wants to date Norman Bates.

Okay, back to Kathryn & Thomas.

So Thomas goes into talk to his pastor. We learn that he's a Huguenot and his family has been attending this church since the 1600's. Seriously, I didn't realize we were all settled at that date in America. But apparently, we were. And the Ravenels were here.

Thomas tries to tell his pastor that Kathryn's a Huguenot too. Though, probably the next generation of Huguenots because she's 22 and he's 51. Thomas tries to explain to his pastor that this could make a good connection, leaving out the part about how they're already sleeping together. Which is not a part of the reformed Calvinist movement last time I checked.

The pastor is not moved. He tells Thomas to think with his head, not his heart. Thomas tries to do the right thing and break up with Kathryn, and it's tragic in a "Thorn Birds" kind of way. You just feel they belong together and the world is conspiring against their love. At least, I felt that way. But I'm a pathetic romantic, and I liked the whole bad girl/guy makes good theme.

Then, fast-forward nine months after the break-up, there is a small film of Thomas holding his beautiful daughter. Guess who is the mother? And guess which baby is wearing Lilly Pulitzer? 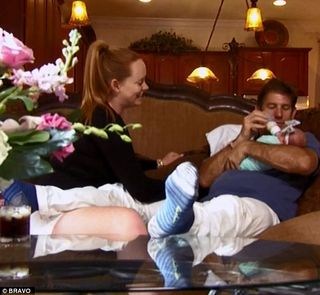 Typepad is up and running, so hopefully, the blog is back. I know what you're saying, how on earth did we survive it? The great Typepad disappearance of 2014. 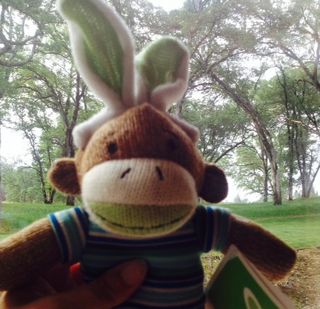 Speaking of survival, did you hear about this kid who survived a trip from San Jose, California (my home airport) to Hawaii in the wheel well to escape his parents? I have a sixteen-year old, and he's blessed with a math brain, so he understands the physics of, "this is not survivable." This kid obviously didn't, and God blessed him for his ignorance.

Seriously, if you're going to go through this kind of trouble to get away from your parents, most of us would prefer you commit credit card fraud and steal away ON the plane. That's a long enough flight without worrying about lack of oxygen and falling out of your seat 35,000 feet. 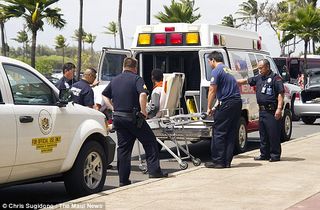 God clearly has a plan for this kid, so let's hope he takes the gift he's been given and makes the most of it.

What did he think was going to happen when he got to Hawaii? No doubt, his parents would be contacted and they will have to schlep over and get him. Luckily, they'll probably be too grateful he's alive to actually kill him.

And note to Seth, my sixteen-year-old, remember how Mommy read you the creepy, stalker bunny mom story? I'm totally coming after you. So let's not do this. 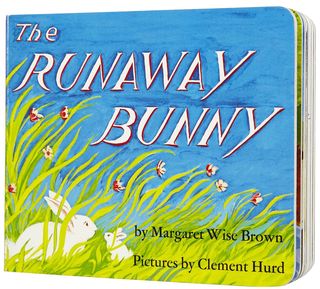