I've had a pretty rotten week. Anyone else? I hope not. On a happy note, someone forwarded this to me on Facebook. What a nice thing to hear when it feels like the world is hating on you.

Inspirational — We love Kristin Billerbeck so we were pumped to see this announcement: she’ll be writing Confessions of a Hallmark Movie Addict, where a famous author on the Science of Happiness is actually miserable until she meets a widower on a cruise. Summer of 2018 from Revell.

I lost a day of writing yesterday in a rude way, so I'm glad to be back to it today. I've been meaning to blog about "Dancing with the Stars" -- I finally made it through an entire show and I actually enjoyed it. I think Mr. T dancing to Survivor's "Eye of the Tiger" is one of the reasons America is the best country ever. I loved the rodeo star Bonner Bolton dancing to the country song, too. Great chemistry. I have no idea who he is, but I loved that dance. 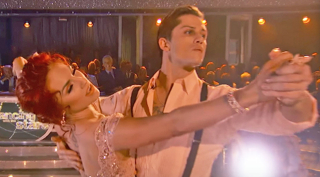 Beauty and the Bison...

I knew I wouldn't like the new "Beauty and the Beast" -- the whole live action thing is hard to take when a woman is basically having chemistry with a CGI buffalo. Not to mention the thing had horns like all the demons in my ghost shows, so that wasn't too attractive. 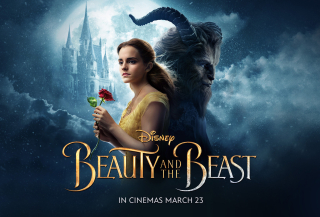 Surprisingly, I really liked Emma Watson in the role of "Belle" and I didn't think I would. Everyone was grand in their individual roles, but there is no chemistry, no spark between them as an ensemble. It's just flat. It's like the original without the magic. I love the original though, so I'm probably biased and as much as I love Emma Thompson, she is no Angela Lansbury and Mrs. Potts just didn't have the appeal. The only character I really couldn't stand was the armoire. Her voice annoyed the daylights out of me. Audra McDonald is her name. Not sure who she is, but she did not appeal to me.

Loved Gaston. Loved Hattie Morahan as the enchantress. But all in all, I was ready to leave and timed my bathroom visit so that I didn't miss the library scene.

It will make a bajillion dollars, so no one cares if it has spark or magic. But I will watch the old one to cleanse my movie-going palate. On a happier note, my sons said that "Kong: Skull Island" was amazing and all that Godzilla promised to be -- but alas, not for Mom.

Wisconsin, what's up? Banning "Kerrygold" butter? It's just wrong. Listen, we know you're the cheese state. That dairy is at a whole new level with you, but have you tried Kerrygold? I use it in my bulletproof coffee every morning, and just writing this is making me crave another one already. http://www.foxnews.com/food-drink/2017/02/23/wisconsin-s-irish-butter-ban-spurs-statewide-dairy-debacle.html 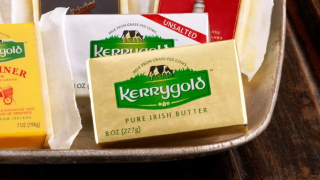 Plus, when you ban something, it just creates more of a desire for it. It becomes contraband, and what is sexier than contraband butter? Nothing, I tell you!

If you're not familiar with Bulletproof coffee, it was first introduced to me by Colleen Coble. She made it for me at her house and it was delicious. It's made for a ketogenic diet or a sugar-free diet. Since I do so poorly on sugar, I'm a fan. I use my fake Nespresso machine to make coffee, then add a little MCT oil, about a tablespoon of grass-fed butter (Kerrygold is the best!) and maybe a little stevia for sweetener. You mix it all up in a blender and you have this frothy delight that won't mess with your blood glucose levels. Yes, it sounds weird, but I'm wondering if Wisconsin's ban won't raise awareness.

To my friends in Wisconsin, I will bring Kerrygold when I come. Never fear.

No, I did not watch three hours of that. I just couldn't. I don't get why Nick is the Bachelor. He's like a lot of the guys in Silicon Valley and to be honest, I don't see what's worth fighting for in him. He's boring as heck. He doesn't seem commitment-focused and he invites a lot of drama into his life. Who needs more drama? 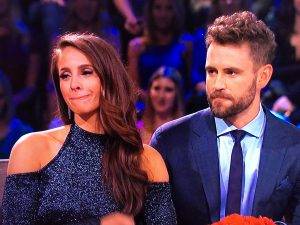 Nick and Vanessa seem miserable. But worse than that? They seem happy to be miserable. Like Eeyore has found a mate. 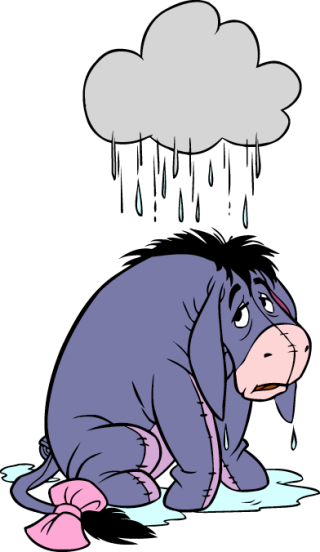 When Vanessa said the word "difficult" about 40 times, I was thinking, girl, this is the honeymoon period. What's up? Raven handled herself so well, and I'm so happy she didn't end up with Nick. She's a sparkly girl and she needs someone who will let her sparkle, not dull her. Truthfully, I would have liked to have seen Raven as the next Bachelorette, but hopefully, she'll find herself a real cowboy back home. It was hard to watch her get dumped because it reminds you how unfair love is. Love makes up its own mind, and it isn't always the cleverest choice. I wasn't happy to hear she was going on the "Bachelor in Paradise" -- she'd do better back home. 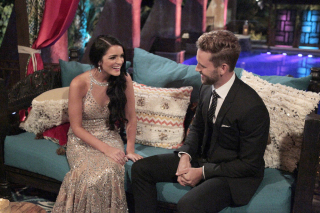 I think Nick is a difficult one to get close to, so I'd be surprised if he made it down the aisle, but we shall see. First, we'll catch him doing the "white boy dance" on "Dancing with the Stars." Who thought that was a good idea?

I like Rachel, but she seems too smart to be "The Bachelorette" but we shall see. What did you think of the finale? I did love Neil Lane's ring. Here's a link if you didn't see it. Neil may be getting this one back. Time will tell. http://people.com/style/bachelor-finale-nick-viall-engagement-ring-vanessa-grimaldi/

Cleveland Bookstore Turns the Spines on all Male Authors for Women's History Month... 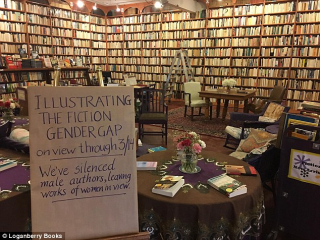 I'm not a fan of this. I mean, you could say the number of men's books in romance, is extremely low. It's not like George Eliot days, when one had to lie about their gender to get published. True, women still publish in "male" genres under names like J.K. Rowling, but the truth is, boys don't want to read "girl" books. It's just a marketing reality.

I really hate this men vs. women thing. We're different. Why is that a problem? My favorite author is male, and he wrote predominately about how unfair the world was, including the church, TO WOMEN. Thomas Hardy wrote about Tess, tarted out by her family, raped and destroyed by men and people who should have known better. When he wrote "Two on a Tower" he wrote about the unfairness of a woman getting older and how she's judged by society and in love. And there is no better FEMALE prodigal story than Bathsheba Everdene in "Far from the Madding Crowd." The woman is ALL FEMINIST. Yet, written by a man and set in Victorian England. 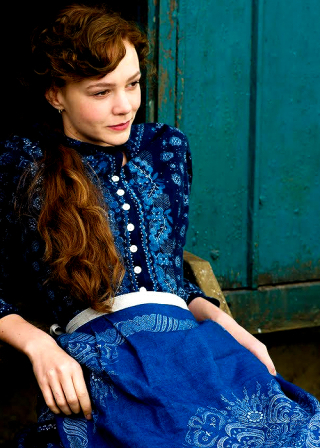 I just hate anything that creates more division in the world. We don't need that. There are amazing female authors. There are amazing male authors. Why does this month have to pit them against each other? I will say that I have seen men get more of an advance for a book that I know won't sell better than a similar-placed female author. That's crap, because especially in the CBA (Christian market) -- the woman's book will sell better. That's misogyny -- okay it's at least patriarchy, and I'm not saying it doesn't exist in publishing, because it does. However, hating on men doesn't fix anything. There are some powerful women in publishing who can do whatever they like -- and so here is to more J.D. Robb's in our future.

Dang, Nick bores me. Granted, I live in Silicon Valley and there are a bajillion Nicks around. Smart, handsome, but lacking the fun gene in my opinion. He's not the kind of guy I'd take to Disneyland, you know? I would totally take Corinne. Say what you will about her, without her one liners, I would not have made it through this season because quite frankly, I don't care who Nick picks. 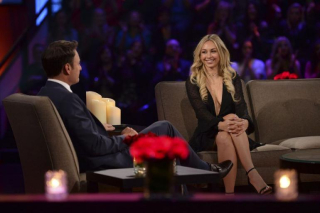 So Vanessa and Raven are left. Vanessa gets all the crappy dates. First, she had to go into zero gravity and vomit on her date. Then, she has to plunge herself in a polar bear dunk. Why? She made the best of it. Manning up better than Nick, but that doesn't surprise me. She's a tough cookie. They have too many serious conversations to be entertaining. Maybe it's good for the relationship, but it sure makes for boring television.

I've loved Raven since the start, but I'd rather see her with Luke Pell from the previous season. She needs a more country dude. 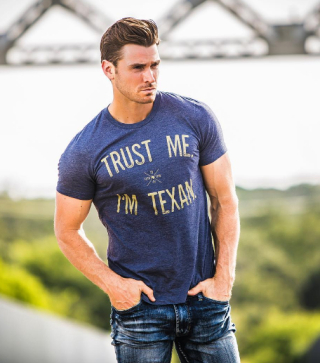 As far as "Napgate" goes. Wow, I hope those women felt badly when they were so rude about Corinne's nanny and found out her mother nearly died of Ovarian cancer and she was trying to be respectful to someone who obviously means a lot to her. I thought that was great proof that you never know what's going on in someone's life. But like I said, I like Corinne because she's a truth-teller. She's missing a filter and she's excellent television.

I should start throwing "Bachelor" viewing parties. Those looked fun. I wonder if I could find anyone shallow like me around here.

In the end, I really liked Rachel best for Luke and I'm sad he didn't pick her. She'll make a great Bachelorette though, so that should be fun. Did you stick it out this season?