Let go of that manuscript...

There comes a time in every writer's life where they have to let go of their baby and put it out in the world. That day has come for me with my latest book, and I can't seem to let it go. It's not right yet. It's not fully baked. And yet, I know it can't be until it's in the hands of my editor who will tell me what's wrong with it. It's not a book until someone interacts with it, and so I'm going to let this one fly.

After I get a bubble tea and read the last chapter again. So almost. I'm almost ready to take my own advice. Until then, enjoy this pretty pic I took this morning. I am legit the worst photographer on the planet, so for me, it's decent. 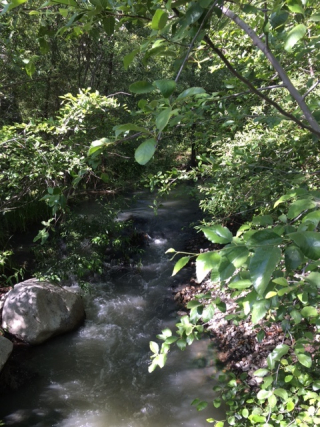 I'm finishing my book tonight. "Confessions of a Hallmark Movie Addict" will be available through Revell Publishers in the Summer of 2018. So why wouldn't I take a break and watch "The Bachelorette?" I love Rachel. Love that she has a huge dog with a broken leg in a cast. She just is multidimensional. I feel like if she never got married? She'd be fine. She's not desperate and this is our first week to really get a look at the guys when they aren't over-produced into a caricature.

When the guys get to the park, Rachel is grilling. Or in this case, standing in front of the BBQ for a photo op. Then, they play some touch football because that's a natural transition.

GROUP DATE #1
Lucas has WAAY too much crazy energy. If he grew up in Woodside, he grew up wealthy, so he's used to being "special." Personally, I find him just annoying. As does Blake, who plans to out him soon. Ashton Kucher and Mila Kunis. They let the guys know Rachel is looking for a guy with health insurance. Again, who isn't? Although, she's a lawyer and probably has her own health insurance, so she needs to set the bar higher. 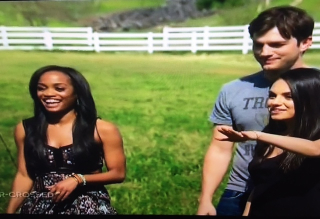 Back at the house, Lee has proved he's lead mean girl and we hear him whine like a little (*(&*.

"The Husband Material Challenge" is six different obstacles of emasculating stations, like changing a diaper, racing with a Baby Bjourn and vacuuming with their doll and cleaning out dirty drains. I don't know about you, but those were NONE of my requirements for a husband. It's stupid to watch.

Lucas, the guy who is probably still living with his mother, wins. Then, he proceeds to have one of his epileptic fits where he says "Waboom" which got old the first time we heard it. In their private time, Lucas reads an infantile poem and Rachel pretends to act flattered.

Blake is the tattle-tale who is ready to tell Rachel all about Lucas. Gag. She's a smart girl. She'd figure it out. All these guys do is look like a worm and waste their alone time.

I love Kenny the Wrestler. He isn't playing. He leaves the gossip circle and heads to his alone time with Rachel. Like a grown-up. Originally, I didn't think they had chemistry. Hopefully, that changes. When Kenny talks about his daughter MacKensie you just feel the love he has for her -- and to be honest, it doesn't seem like something she wants to take on.

There doesn't seem to be any chemistry with any of these guys on night one. Next. Dean gets the group date rose. He was the one who said, "When you go black, you never go back." Classy, dude. But they do have chemistry at least. 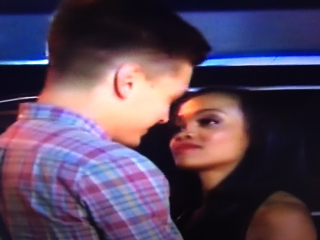 ONTO THE FIRST ONE-ON-ONE DATE: PETER

Rachel says she's intrigued by Peter and they're going to Palm Springs, but she surprises him with an extra guy: Copper, her dog. She definitely has chemistry with Peter. They go to BarkFest -- which is a dog park/spa event for people with dogs who have better lives than all of us.

This pic says it all about Peter. He's dancing with her dog, so Copper doesn't have to be on that broken leg. #Keeper 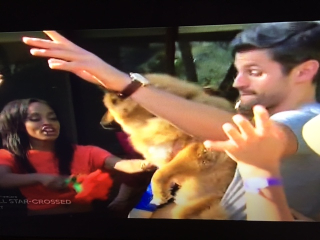 Sidenote: Does anyone else hate that weepy cartoon commercial with the overworked mom going to online university? Honestly, it's as bad as those Sarah McClachan SPCA commercials -- only it doesn't work. It's just annoying.

At night, Peter and Rachel go to the La Quinta Inn and she ask how his parents reacted. Good question. Answer: Positive. I love that he brings up their gap teeth and says, "If we have children at some point, they're pretty much screwed."

They both agree it adds character. I love that neither one of them fixed it. I really like when people have REAL teeth and they don't have Chicklet veneers. Good for them. Peter explains that he was broken-hearted and went to a relationship counselor -- and so did Rachel. They talk about how they got prepared and what wasn't working for them. Imagine, two people who take responsibility for their part in a bad relationship? I love these two together! He gets the rose. He also gets bonus points for talking about kids on the first date.

Cue the fireworks. Interior and exterior.

Kareem Abdul Jabbar is on this basketball date, and the guys all jump and down like little girls. To get laughed at by Kareem has to be on the top list of humiliating moments. (Lee) 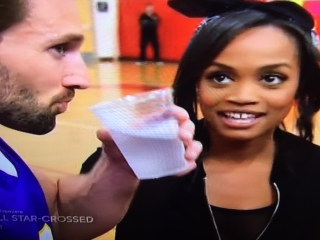 DeMario's current girlfriend comes and rats him out. I do love that Rachel goes and gets him and he's thinking one-on-one time and he's getting a scenario every player fears. Girl says DeMario still has keys to her apartment. DeMario says, "Who's this?"

Josiah's protective nature stands out and I do believe that's who he is. Protective of those in dismay. But their kiss seemed creepy and not genuine. Some dude sings her a song in another language. Russian. She proceeds to crack up nervously as most women do when a guy sings to them on a date. (Unless your name is Harry Connick, Jr., this is never a good idea.)

Eric has what he calls a passionate kiss with Rachel. I thought it looked awkward, but what do I know? Josiah gets the group date rose. Then, at the rose ceremony (which doesn't happen) DeMario is waiting outside. More pointless drama. Even if that girl was lying, DeMario's done just by pretending he didn't know her. Only a player would do that.

I'm on deadline, so TV has been background noise for the most part. But I just wanted to comment on the the new Bachelorette, etc. And hear your feedback! 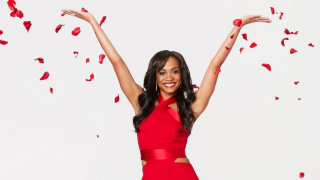 I love Rachel as a bachelorette. She's smart, gorgeous and about more than getting married. THAT is what this franchise needed. Some fresh blood! Josiah the lawyer and Kenny the wrestler. Sadly, she had no chemistry whatsoever with Josiah -- and not much with Kenny. Girl, come on! But I guess you can't help that.

I loved the Marine who got kicked off, but I could be partial because my son is a Marine -- and he's from San Francisco. 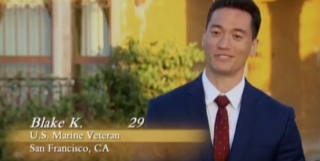 I didn't like the guy who got kicked off and claimed it was a waste of time. Really? You don't have a few hours to figure out what you don't want? Milton, you're not a keeper in my book -- acquire some patience.

Onto Southern Charm and the weird etiquette Nazi named Georgette, who helped her design her weird Caftans with her dogs on them. They're $300 for a housecoat! My grandmother wore them and they're not elegant and classic. They're a freaking moo moo and you seem like a crazy cat (dog) woman in them. No bueno. Also, if you paid $3,000 for ANYTHING in India, they saw you coming a mile away, lady. 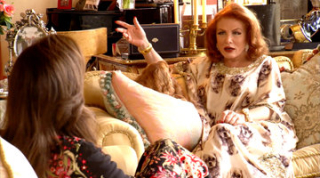 I'm sure Ms. Georgette is brilliant and very accomplished, but I did not like the homage to the giant diamond she was wearing.

As a person who lives in a place that's about 85% Indian, I thought it was weird that they all dressed up in "theme" dress. If I did that, my neighbors would all tell me how I was wearing it wrong. Guaranteed.

Is it wrong that I took a little pleasure in Thomas' dad dissing him a little? I'm not a fan of Thomas's, and I feel his underhanded, sneaky ways of trying to destroy Kathryn is pathetic and disgusting. Take note ladies, this guy will do that to whomever he's with to "win." To think, he's looking for his "soulmate" but now we hear he's dating the nanny's daughter. http://radaronline.com/celebrity-news/kathryn-dennis-custody-battle-thomas-ravenel-dating-nanny-teen-daughter/

Dude, you're old. Date someone you have something in common with, how hard is that? You're not the stud you think you are. OMG, the time he was describing his khakis to Whitney and how all the women wanted him in those pants? Ugh.

Vomit-inducing. When I watched this show with my son's girlfriend, she asked why is everyone on this show so old and unattractive? Usually, reality shows are about young, hot people living interesting lives. LOL She mentioned some, but I'd never heard of them. Because I'm old. And I enjoy "Southern Charm." I can't wait to get to Charleston and see the real deal!

And I didn't get a chance to finish RHONY, but I'm loving Bethanny with Fredric. I'm sick of hearing about her ex though. She needs to move on and stop letting him affect her in any way.

What's happening in your world?

Not much going on in mine. I've quit my day job and decided I'm a writer and really not good at anything else. So it's terribly sad that writing is such a hard gig to make a buck on -- what's up with that?

Anyway, you'd think I'd be Hemingway by now, but that is not the case. Still writing Chick Lit, still enjoying it. Although my next book is going to be bigger. More of a saga, so I'm excited about that. Also, about the "Confessions of a Hallmark Movie Addict" book -- which I'm doing the final edits on for my publisher. It will be turned in by the end of the month.

My son came home and surprised me from Okinawa. If you haven't seen the video, I blubbered. It's on my Facebook author page. https://www.facebook.com/KristinBillerbeckBooks/ 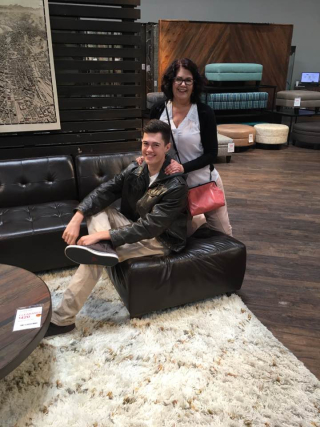 I've lost 15 pounds, but I don't feel any thinner. What's up with that? I cannot do the depression diet again now that Jonah is across the world again. Your kids are supposed to have their own lives. Granted, it would be heaven if they could have them down the street, but it doesn't always work out that way.

We met my boys at a half-way point, so I got to see all my children at once. First time in a year. That was the best Mother's Day gift of all.

Oh, we saw "Guardians of the Galaxy 2" which I loved even better than the first one. Groot is adorable, and he dances to my son Trey's favorite song, "Mr. Blue Sky" by ELO. I think it may be the cutest scene in a movie ever. Jonah always wondered why that song hadn't been used in a film yet. Because they were saving it, Jonah. For this greatness. 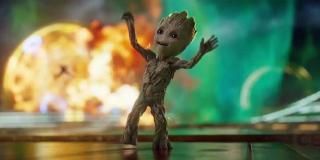 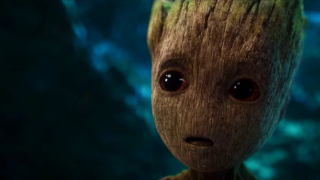 Keep in mind, I still haven't made it through "Star Wars" or "Top Gun" but I love the Guardians series. Go see it, it's a fun movie for everyone. There may be language. I have a Marine and grew up Italian, so I don't really hear it. So what's up out there?