Colin Firth is a hero again...

Colin Firth is making financing available to Rupert Everett in his new film on Oscar Wilde. Okay, here's one author who was never boring. He brought us a glimpse into narcissistic personality disorder before it was probably called that. (The Picture of Dorian Gray) His life is worthy of a movie and I'll be first in line, so thank you, Rupert. The movie is called, "The Happy Prince."

Thank you, Colin. Not everyone wants to see some fake superhero save the world from impending doom. Unless it could actually work and politics would go away.

What this world needs are more costume dramas. I'm so tired of politics. It's so ugly out there!! Rupert is perfect to play Oscar. He was so good in "An Ideal Husband" and "The Importance of Being Earnest" and I feel like he understands Oscar.

There's a new period drama with Keira Knightley coming out called "Collette" and I will see it, despite Keira -- who is forever on my crap list for playing a giggly Elizabeth Bennet. But it's about literature and it's got beautiful costumes, so I'll be there.

The Five People (Living or Dead) you want to meet:

My parents were having this discussion after reading a book. I've thought long and hard about my list. Most of them are entertainers because what would I really ask a scientist? Although I would like to meet Galileo and find out what it was like to be abused by the church when he was right all along. That had to be a tough life. I also realized most of my list is not alive. So let's start with the live one:

1. Steve Perry (Journey) This probably wouldn't be too hard. I mean, he goes to the Giants' games and I could go stalk him. But who would want to meet a creepy stalker fan? Still, I think his voice is heaven on earth and I just love his spirit and love of life.

2. Fred Astaire -- my eternal crush. I adore him. I know he could be tough to work with because he was such a perfectionist but sigh...I love him. This is me with my hands in his handprints. My feet were too monstrous to fit into his shoeprints. 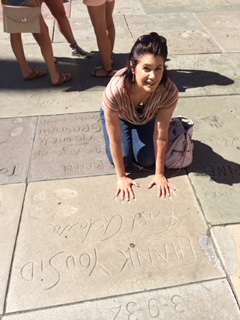 3. Freddie Mercury -- I'm SO excited about the Freddie Mercury movie, Bohemian Rhapsody. I just loved him. His voice and talent were bar-none. He was also brilliant and I'd love to know what he learned in life and what he had to say about the life he lived. 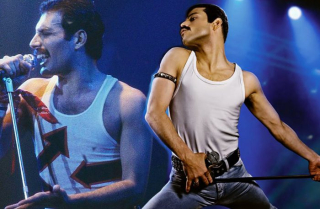 4. Thomas Hardy -- you would think as an author, I'd have more writers on my list. But being a writer, I know we're totally boring and save it all for the page. So Thomas Hardy is the one I'd like to meet. He's not only my favorite writer, but he allowed the critics to stop him. (After writing "Jude the Obscure" he never wrote fiction again and turned to poetry.) I wonder if he regretted that? Or if he felt Jude was the book he wanted to go out on...

5. Princess Diana -- I want to know what she would have done differently. I mean, marrying a man who didn't love her wasn't her fault. She was young and in fairy tale mode. I'm sure she doesn't regret having her children as they brought her so much joy, but I wonder if she would have stopped looking for love in the wrong places if given another chance. As a fellow INFP, I can understand living too long in a dream world. I wonder if she regrets not waking up sooner.

Who would you want to meet?