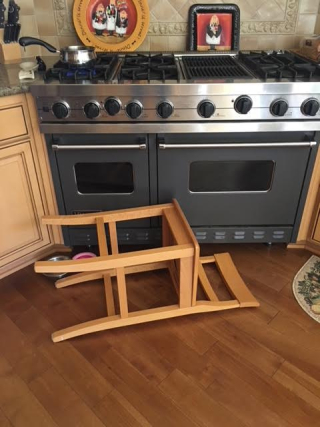 This is my mom's stove. It's a piece of art and a pain in the bum to clean. It's also not working (the ovens) right before Thanksgiving. We are having twenty people for Thanksgiving. All of my kids, kids' friends, cousins, etc. My dad bought a tabletop roaster for the turkey and we're grilling the ham to warm it. I say we like I have anything to do with it. I'm not cooking this year.

I think this is pretty indicative of who my parents are. If that happened to me, I'd be like, okay, Safeway, make my turkey and I would have given up. Not my parents. Since it can't be fixed until November 30th (apparently, the Viking man is busy) they are going to keep calm and carry on. This is why I'm the "different" one in my family. I panic. They reset.

The truth is, the food doesn't matter anyway. This year, with the fires in California, I think we can all agree that we have everything to be grateful for if we have a roof over our head and our loved ones beside us.

Triggered by Mike on #ShahsReunion 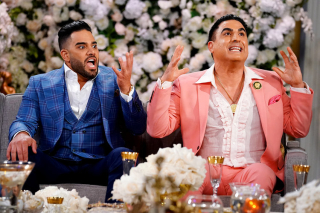 I feel like the "Shahs of Sunset" are the reality version of the "Seinfeld" cast. They seem like really terrible people -- and maybe we all would if we put our lives out there like that. But wow, Mike triggers me. I find him to be such a misogynist and his "I love women" comments seem well-rehearsed and part of the act to collect notches.

Seriously, who would want to be married and go through childbirth with someone who felt the need for you to be perfect at all times? A big no thanks. Anyway, that triggered me last night.

It's no secret that I love music -- the 80's are my jam so naturally, I was excited to see "Bohemian Rhapsody" and I went to a prescreening on Halloween night. Loved it! I know it was a sanitized version of Freddie Mercury's life, but could we really handle the hard truths of such a legacy? Probably not. The truth is, he was a genius and like all geniuses, slightly off-kilter. Ego takes hold and the inevitable downward slide takes place. The great thing about Freddie Mercury's story is that even though it ends tragically, it doesn't. Freddie gets what he's done wrong, and I do hope that part of the story is true. I believe it is since he left his ashes and money to his wife. 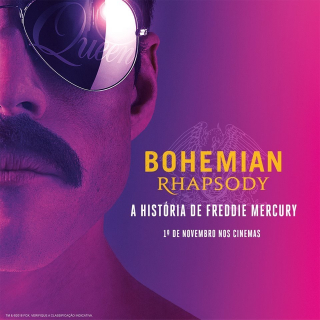 I was so excited to hear my son's friends had all seen the movie on opening weekend. It made me feel like a winner as a parent somehow. ; ) I'd done my duty. I had introduced classic rock to my children and they got it. A total success story for me. I wanted to know how they enjoyed it, not having lived through it -- and they loved the movie. They were interested in the story and the tale behind one of rock's greatest anthems. They also informed me Mike Myers was in the movie (I missed that.)

Go see the movie. It's Queen for crying out loud. I'm going again this weekend with my friend. IMAX this time. 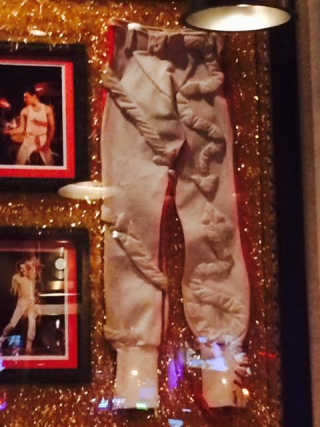 Well, lovely readers, I am in the midst of a life shift. It seems I've been in this place for four or five years, but that's what happens when most of your kids are Irish twins (close in age.) And yes, I'm Irish so no cultural appropriation here. I say I have empty nest sadness, which ticks my daughter off because she says, "I'm STILL here. You do NOT have an empty nest."

But teens are rarely around. Little buggers just come home to sleep and raid your fridge.

I am back to writing daily though, and that's a big deal. I feel essentially the Christian market has left me. I mean, I was never a perfect fit for the Christian market as it was, but now I feel an age away. The books I'm working on have a lot more family drama and humor has never been a big draw for the market. I've tried to write straight (ie., in third-person and without humor) and it's just not me. I always have to be the weirdo!

So I'm currently working on a few books and if they don't sell then I'll be self-publishing them and getting that arm of my career going. The one thing I don't want to do is write to the market. I'm too old to write to what's selling -- does anyone want a sweet romance from me anyway? I'm definitely too defiant. And I've never once met an Amish person, so that isn't happening.

I write about what makes me angry. "Swimming to the Surface" is the novel about a friend whose husband was a pompous ass and pastor, combined with another friend whose wonderful "Christian" husband left her for a man. Incidentally, it's not the gay part I took issue with. It's the LIVING A LIE part. If he wasn't a selfish jerk, he could have gone off and lived his life, rather than destroy his wife and make her feel ugly, unwanted and always wrong. In real life, this man made his wife look nuts when she knew his truth all along. She was kicked out of the church for not being submissive and "ruining her marriage." They kept him. Until he left for his new boyfriend. But that all got brushed under the carpet. The thing is, sin is like energy. It doesn't go away, it changes form. And it infects.

We're all hypocrites, don't get me wrong -- none of us is perfect. We are all the prodigal son and those who think they are the "good" son who stayed home are in the biggest trouble. God sees all.

Anyway, after 20 years in the industry, I've seen a lot over the years. Maybe I'm jaded. Maybe I'm just sorry to be rejected (I don't think it's this though, or I'd write what is selling.) Rejection is just part of the publishing game. The issue for me is that I cannot color between the lines.

I'm working on a few books. They're funny. They're romantic. But they're also dealing with some hard issues -- like narcissism in the church, a sociopathic mother and mental illness being viewed as "sin." They're not for the Christian market -- though they contain no swearing or questionable sex scenes. The beautiful part about this new publishing era is that it allows for me to write to MY market.

Sometimes we have to change whether we want to or not. (Waving hand wildly!) Life has a way of moving us forward.

Here I am with the great Frank Peretti who a., did not write to market and who b., single-handedly started the Christian fiction realm. 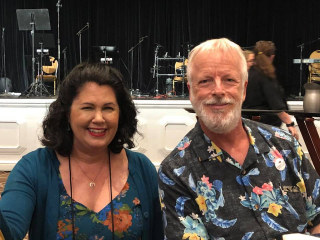 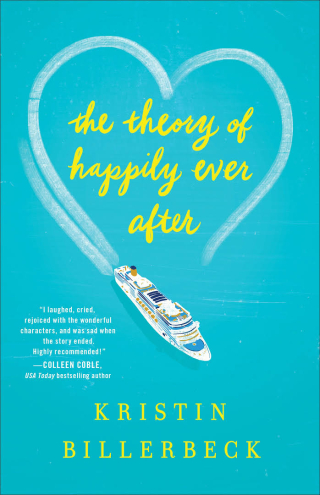 When her fiancé dumps Dr. Maggie Maguire for an acrobat, the breakup sends Maggie spiraling into an extended ice cream-fueled chick flick binge. Her friends book her as a speaker on a "New Year, New You" cruise in the Gulf of Mexico.

When a stranger on board insists that smart women can't ever be happy, Maggie sets out to prove him wrong. Along the way she discovers that happiness has far less to do with the head than with the heart-- and sometimes happiness is already out there searching for you.